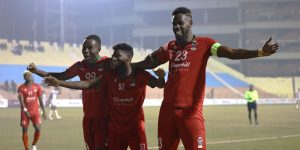 Rajasthan United FC’s joy of beating league leaders Sreenidi Deccan FC proved to be short-lived as they were trounced 5-0 by Churchill Brothers at the Ambedkar Stadium on Tuesday, January 17. The defeat also ended their unbeaten home run.

Everything went wrong for Pushpender Kundu’s men right from the word go. His defence lost the plot in the second minute of the game. It was Aidar Mambetaliev, otherwise the leader of Rajasthan’s defence, who made an error and Emmanuel Yaghr ran into the box, went past hapless goalkeeper Rafique Ali Sardar to make it 1-0.

Rajasthan United’s midfield general and captain Joseba Beitia had an off day while Churchill’s Afghan midfielder Sharif Mukhammad had a perfect one. The match was perhaps lost there as Rajasthan United could not even create many worthwhile chances. Even when they did, Leonce Dodoz did not look in shape for the second match running.

On the other hand, Yaghr, making his first start, and Abdoulaye Sane, looked made for each other. It was the Ghanaian who provided the assist to Sane from another defensive lapse in the 29th minute. Sane’s left-footer across Rafique doubled the lead.

Yaghr looked set to score his second nine minutes later as playing the high line once again proved disastrous for Rajasthan United. The entire Rajasthan team was left behind as he ran for the ball from a nice through ball. Rafique came way out of the box to clear it. However, the second half turned out to be worse for the Desert Warriors as it belonged to Churchill Brothers’ Anil Gaonkar.

Churchill Brothers earned three corners within the first seven minutes when play resumed and the Rajasthan United defence gave in to the pressure in the 54th. Anil took a few seconds more than expected on the left flank to deceive his marker in shifting the ball to the right foot and unleash a perfect cross. Nobody was found marking Yaghr, who headed in his second and the Red Machine’s third goal.

Seven minutes later, it was Anil’s turn to go for glory. Sane once again got past almost the entire Rajasthan United defence, cutting in from the left but went too far. He was intelligent enough to earn a corner. As Mukhammad’s corner came away from the goalmouth melee, Anil got it at his feet and with a clear look at the target, slammed his right-footer into the net.

It could have been 5-0 in the 75th minute when a through pass spilt the Rajasthan United defence once again and found Anil in the penalty box. He only had to beat Rafique. Amritpal Singh came up with a helpless tackle that brought Anil down and Churchill Brothers expected a penalty. However, referee Dipu Roy thought otherwise.

It did become 5-0 though, with the last goal coming in the 90th minute. It was Sane’s second goal in the match and sixth this season. The Senegalese got the ball on the edge of the Rajasthan United box and for one last time, Aidar and Amritpal made an error of judgement in not going for the final tackle. Sane comfortably curled it into the top-left corner.

It was Churchill Brothers’ first win of the new year, but they remain in eighth place. However, their goal difference has also improved to +9 now, which may prove to be crucial in the end. With just three points separating the Red Machines from TRAU in third, more consistent performances from Fernando Santiago Varela would help them climb up the ladder considerably.