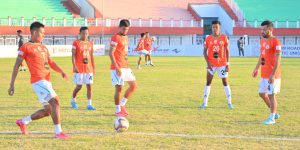 When NEROCA and TRAU met each other in December last year, their seasons looked to be unfurling in the same way. Both teams were perched firmly in the bottom half of the table, both staring at a relegation battle. With the turn of the year has come a turn in fortune, for one of them at least. The Red Pythons turned things around in style. They have won back-to-back games and risen to third on the table, going from relegation fighters to title hopefuls in the space of a few weeks. NEROCA meanwhile remain second to last, their last win arriving in November, against Mumbai Kenkre FC.

TRAU are bouncing, and go into the Imphal derby full of confidence, having handed defending champions Gokulam Kerala their first home defeat of the season last time out. NEROCA meanwhile know the value of points having picked up a vital one from a goalless stalemate against Churchill Brothers in Goa.

The last time these sides met, TRAU scored a dramatic last minute winner in a comeback win, grabbing three points in what was an evenly contested tie. While TRAU go into this encounter favourites, they will know better than to bank on reputation. In this game, the only guarantee is that of goals — the last seven Imphal derbies have seen at least two goals in the game.

Addressing the media at the pre match press conference, NEROCA FC head coach Khogen Singh expressed confidence, hoping that the occasion would bring the best out of his players. “It’s a derby game and it’s our home match so we will have support,” he said. “I’m sure the boys will give their best out there.”

Singh was melancholic about his team’s form, but said the dressing room atmosphere remained positive, and the players motivated to get the points over their city rivals. 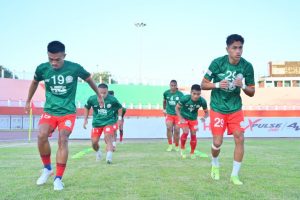 TRAU FC head coach Nandakumar Singh was full of praise for a young NEROCA side and offered kind words for the local talent they had within their ranks. “It is always tough to play against them,” he said. “The local boys are really talented so it will be a very competitive game.”

The match between NEROCA and TRAU will be broadcast live on Eurosport and Doordarshan Sports and streamed live on the Discovery Plus OTT platform.