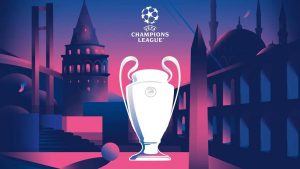 The 2023 UEFA Champions League final identity for Istanbul will be officially unveiled today at this season’s group stage draw. The final design features local elements from the host city in combination with iconic aspects of the competition.

The 2023 identity is part of a series of final designs crafted by an artist from the host city who has been assigned to create an artwork reflecting the artists’ impression of the final city.

While the design changes every year, the trophy remains at the centre of the visual identity, ensuring a consistency between finals and recognisability throughout time.

Produced by artist and illustrator Tolga Tarhan, who is a native of Istanbul, the 2023 Final identity is based upon an abstract depiction of the city at sunset. Inspired by the rich colours of the Istanbul sky and the vivid lights of this bustling city, the scene features iconic landmarks such as the Galata tower, the aqueduct and the bridge across the Bosphorus.