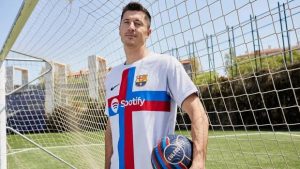 Nike and Catalan giants FC Barcelona have launched the club’s third jersey inspired by the Cross of Sant Jordi, on the club’s 30th anniversary of the award presentation.

In the third kit, FC Barcelona chose to showcase the club’s commitment to social causes, diversity and inclusion for their third kit, brought together with a similar simplistic style design.

For that reason, players from the Barca Genuine Foundation team appear at the forefront for the launch of the third shirt.

Moving away from the usual stripes we see donned on the club’s kits, the 2022-23 third kit focuses in on a large red and blue cross on the chest over an all-over grey base. The Spotify sponsor logo features in the middle of the cross in grey, with a classic black Nike swoosh and FC Barcelona crest on the front.

The said cross commemorates the award of the Cross of Sant Jordi, awarded to the club in recognition of its contributions to the betterment of society and its leading role in the promotion of the sport, as well as its values in relation to sport, civic duty, and solidarity, which make it so unique in the sports world.

LaLiga, one of the major football leagues that is responsible for organizing professional football competitions …