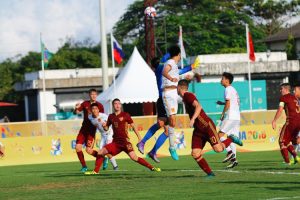 Russia grabbed their second win of the Tournament and moved into pole position in the group, displacing Brazil, as the Russian Colts defeated China 4-1 in their second match of the BRICS U-17 Football Tournament at the Athletic Stadium in Bambolim, Goa.

Braces by Lopatin Daniil and Kolesnichenko Kirill proved to be enough for Russia to get the job done and take home three points, before China pulled a goal back late in the second half through Tao Qianglong. Dmitry Ulyanov’s Team has now garnered six points out of a possible six.

Russia took the lead as early as the 6th minute when Kolesnichenko Kirill’s header off a cross from the right flank made the scoreline read 1-0.

Despite China penetrated the Russian half, kept the ball in their attacking third, the Russian defence mopped attacks with acumen, and did not allow China enough space to foster one clear goal scoring chance.

Russia were awarded a chance to double their lead minutes before the half-time but Kirill this time could only skew the ball for an onrushing Semen Radostv, whose shot got lost in the defensive track.

Russia went straight off the blocks after coming out from the tunnel and Daniil Lopatin’s shot came agonizingly close to doubling their lead, seconds into the second half.

China had a golden opportunity to equalize their deficit in the 55th minute after Russian custodian came out of his lines to intercept a long through ball but failed to control it properly. Huang Cong took displaced the Russian custodian and released a cross for Tao Quianglong, who failed to slot the ball home in an empty net.

Russia secured the deal in the 60th minute when a quick flurry of passes saw Lopatin Daniil onto goal and the Russian exquisitely blasted the ball home after outfoxing a Chinese tackle to double the lead. Kirill added gloss to the scoreline nine minutes later as a thunderous left footed shot, which crashed into the back of the Chinese, made it 3-0 for Russia.

Shortly after, Lopatin Daniil made it 4-0 for Russia and Tao Qianglong pulled a goal back for China in the dying embers of the match from the penalty spot as the full-time scoreline read 4-1 in Russia’s favour.