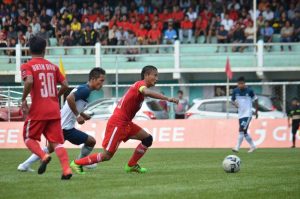 Round 7 of the Mizoram Premier League – Season 5 saw local football action at the beautiful Chhangphut Field at Champhai with champions Aizawl FC taking on Chanmari West FC in the first match.

Defending champions Aizawl FC have slumped to two defeats and a draw in six prior fixtures and were looking for back to back wins after victory over Ramhlun North FC earlier in the week.

And they played accordingly, dominating possession and threatening their opponents. Chanmari West FC, an exciting team to watch themselves, struggled to produce the scintillating counter-attacks they have been known for.

Aizawl FC created chances with wingers Brandon and Albert both thwarted by the heroics of Chanmari West FC goalkeeper Lalruatpuia. African striker Bright Mends brilliant header was denied by the bar as well.

The second period saw much of the same action until the 67th minute when Chanmari West FC took an unlikely lead when Lalthakima’s attempted clearance went inside their own goal.

The champions then looked for the equaliser but The Man of the Match Lalruatpuia produced a goalkeeping masterclass and denied them a point in the end.