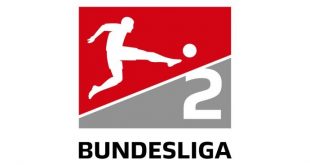 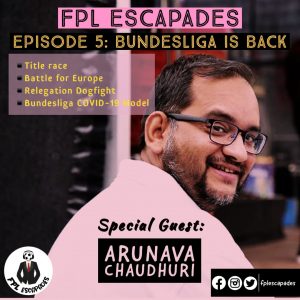 In the 5th episode of FPL Escapades; Anand, Akshay and Sanket are joined by a very special guest and a stalwart of Indian Football; Arunava Chaudhuri.

Top youngsters to keep an eye on in the Bundesliga, Transfer speculations involving Timo Werner, Jadon Sancho, and Leroy Sane, Predictions for the title race, European spots, and relegation candidates.

Graced by the expertise of Arunava Chaudhuri, we also discuss the financial ramifications of the Bundesliga getting voided; the financial, logistical, and operational framework of Bundesliga resumption; the impact of Dynamo Dresden and other Corona positive cases on the fate of the Bundesliga and the German Bundesliga COVID-19 Model which looks to set a benchmark as the other major European football leagues plan to return back to action, soon.

Tune in to learn about everything you need to know as live Football action makes a much-awaited comeback in our life, through an all exciting German Bundesliga.

@Arunfoot
Previous I remember meeting PK Banerjee & Chuni Goswami for the first-time!
Next AFC VIDEO: Let us come together and #BreakTheChain!

In Bundesliga 2, the next two matches of both Karlsruher SC and SV Sandhausen cannot …