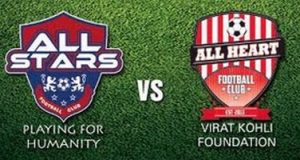 Tonight on Saturday, June 4, Mumbai witnessed a high voltage Celebrity Clásico 2016, a game of football between Bollywood’s All Stars FC and the Cricketers All Heart FC in a charity match for the Maharashtra Drought victims at the Mumbai Football Arena in the Andheri Sports Complex.

The match ended in a 2-2 draw after the Bollywood stars of All Stars FC had taken a 2-0 lead but the Cricketers of All Heart FC fought back to earn a draw.

All Stars FC missed their captain Abhishek Bachchan due to an injury, but Ranbir Kapoor took over the armband to lead ASFC onto the field which included Arjun Kapoor, Aditya Roy Kapoor and director Shoojit Sircar; while the Virat Kohli captained All Heart FC had India’s 50 overs skipper Mahendra Singh Dhoni besides Zaheer Khan, Harbhajan Singh, Yuvraj Singh, Ajinkya Rahane, R. Ashwin and Ajinkya Rahane playing for them.

All Stars FC went 1-0 ahead through a Shoojit Sircar header off a pass from Dino Morea while physical trainer Antonio Pecora enhanced their lead to 2-0, but before the break Yuvraj Singh reduced the deficit for All Heart FC leaving the Cricketers with a chance of a comeback.

After the breather it took some time, but the Cricketers equalised through K.L. Rahul and the match ended 2-2 on the final whistle after an intense encounter.

Both sides said after the game that this match, the second time it was happening after 2013 in New Delhi, would hopefully become a yearly affair to raise money for charity and raise awareness about good causes.