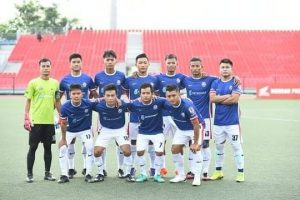 Two time champions Chanmari FC were able to start their MPL9 campaign with a win after overcoming Electric Veng FC with a solitary goal.

A second half penalty earned and scored by F Lalnuntluanga proved to be the difference between the two sides in an evenly contested 90 minutes.

Chanmari FC’s custodian MS Dawngliana was called into action a couple of times before and after the break by Electric Veng FC as he needed to make saves from Remsanga and Thanga Hmar.

Lalmuankima also had a chance to put Chanmari ahead early on in the first half but was unable to put the finishing touches after being put through.

Man of the match : Lalremruata (CFC)