Chennaiyin FC test coming up for Hyderabad FC in the Durand Cup! 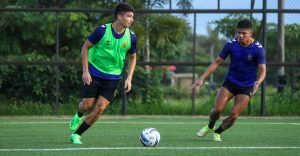 After a commanding performance to kick-off their Durand Cup campaign, Hyderabad FC are back in action, when they take on their South-Indian neighbours Chennaiyin FC, in their second Group-C clash this Friday.

Manolo Marquez’s side are currently second in the group table, just a point below NEROCA, who stand on top. Chennaiyin FC, who drew their first game with Army Red FT, are fourth in the table. But both teams could go top with a positive result in this game.

And Manolo revealed that his side will be ready for this clash. “We are not too far into our pre-season and we need to make sure that all the players get some minutes. But we respect the competition, want to reach as far as possible and will give our best in this game,” said the Hyderabad FC Head Coach.

The Marina Machans have a strong squad led by a new boss in Thomas Brdarić. New signings Fallou Diagne, Julius Duker and Gurmukh Singh might be joined by the likes of Vincy Barretto, Mohammed Rafique and Romario Jesuraj for this crunch clash.

Duker and the experienced Edwin Vanspaul scored in quick succession late in that game against Army Red but a 96th-minute equalizer left Chennaiyin FC with just a point from that evening.

Hyderabad beat TRAU FC in their first group stage game, with up to six players making their first start for the club. Halicharan Narzary and Borja Herrera scored two sensational goals, as Manolo’s men kicked off their Durand Cup campaign with a comfortable win.

The two teams played out some close-fought contests in the last ISL campaign and we can expect something similar from this clash as well.

The game kicks off at 3pm IST, and will be telecasted live on Sports 18 and streamed on the VOOT app.