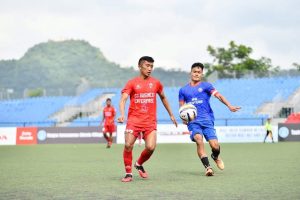 FC Venghnuai were able to hold former champions Chhinga Veng FC to a 1-1 draw despite player the closing stages of the game a man short on Friday afternoon.

Venghnuai goalkeeper Joel B. Lalramchhana encountered a busy afternoon at Rajiv Gandhi Stadium as he was called into action numerous times from the first period.

Chhinga Veng FC made the breakthrough in the second half through an own goal from Lalnunsiama in the 63rd minute. But the lead did not last long as C. Ngurnuntluanga was on hand to finish off a delivery from C. Ramdinmawia after two minutes.

Venghnuai captain Thanga was then sent off in the 80th minute, which made things difficult for Venghnuai but they ultimately had enough to steal a point against their opponents.