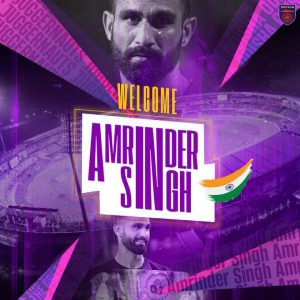 Odisha FC has successfully completed the signing of Indian International goalkeeper Amrinder Singh. The Punjab-born custodian joins as a free agent for the upcoming season.

Amrinder Singh was part of Pune FC’s youth team and went on to play for their senior team before moving to ATK FC for ISL 2015. After that, he turned out for Bengaluru FC in the I-League. The custodian joined Mumbai City FC for ISL 2016 and kept five clean sheets in six matches for the Islanders, winning the Golden Glove award in his debut season with the club.

The 2017-18 campaign proved to be even better for the goalkeeper as he finished with 59 saves – the most by a keeper that season. The India international impressed again in the 2018-19 campaign, keeping seven clean sheets in 19 matches. The 2019-20 season saw Amrinder keep four clean sheets. He was one of Mumbai City FC’s best players in the 2020-21 ISL, keeping 10 clean sheets in 23 matches as the Islanders secured the League Winners Shield as well as the ISL trophy. In a surprise move, the shot-stopper joined ATK Mohun Bagan in May 2021.

Singh was born on May 27, 1993 in Mahilpur, Punjab. Amrinder took up the game of football at a young age but did not play consistently till the age of 15 when he joined his school’s government ran academy, Sports Wing Academy in Paldi, Hoshiarpur in Punjab. Initially, Amrinder started at the Under-17 level as a striker at Sports Wing Academy but his coach Yarvinder Singh noticed that Amrinder had a good build and reach and encouraged him to be a goalkeeper.

He started excelling as a goalkeeper and stayed at the Sports Wing Academy for another two years. While still at Sports Wing, however, Amrinder was selected by the Punjab Football Association to represent the Punjab state national team at the Under-17 and U-19 levels. His greatest achievement while with the Punjab team was when he helped Punjab win the BC Roy Trophy. After winning the BC Roy Trophy, he was advised by former Pune FC player Asim Hassan’s father, a well-known coach in Punjab, to trial at the Pune Academy. He passed the trial and was placed in the Under-19 squad.

Amrinder represented India U-23 during the 2014 Asian Games and was the starting keeper in both of India’s games. He was named the captain for India U-23s for the 2016 AFC U-23 championship qualifiers in Bangladesh and started in India U23’s 0–2 loss to Uzbekistan U-23 on March 27, 2015. He got his senior team call-up for the 2019 AFC Asian Cup qualifiers but did not play any matches.

On August 19, 2017, Singh made his international debut for the senior team against Mauritius, which ended in a 2–1 win for India. He was then called up for the 2018 Intercontinental Cup. He made his first and only appearance in the tournament against New Zealand on June 7, 2018, which ended in a 1–2 defeat for India. Amrinder was included in the squad to take part in the 2019 King’s Cup.

He only played one match in the tournament, and that was against Thailand on June 9, 2019, which India won 1–0. After India qualified for the 2019 AFC Asian Cup, India announced their 23-man squad for the tournament, where Amrinder was called-up as the backup goalkeeper. After the AFC Asian Cup, he was called up for the Indian squad to compete in the 2022 FIFA World Cup qualifiers.

Amrinder on joining Odisha FC said, “I am very pleased to have signed up for Odisha FC. After deliberating over various options, I feel the project Odisha FC as a club has envisioned is the one that matches my ambition and commitment. The club has built a young and enterprising team, and under a coach like Josep Gombau, I am sure we can achieve the goals set for the season. Odisha FC as a club and the state of Odisha is ready to take the next step in Indian football, and I am privileged to be given a chance to play my part in this.”

Previous Chhinga Veng FC held by 10 man FC Venghnuai in MPL-9!
Next Three in a row for Aizawl FC in MPL-9!