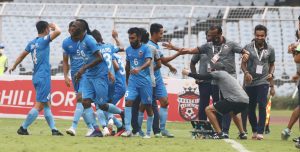 Churchill Brothers’ slump in form could not have come at a worse time in the season. While the Red Machines were cruising on top of the I-League for much of the season, two back-to-back defeats have left them stunned and almost on the cusp of falling out of the title race.

The Fernando Varela-coached side would have to draw inspiration from their past performances in the I-League this season and aim to take the win over TRAU when the two sides clash at the Kishore Bharati Krirangan in Kolkata, West Bengal on Sunday (March 21, 2021). The kick-off is slated for 2 PM IST and the match will be live-streamed on 1Sports, whilst being streamed on their Facebook page.

A win over TRAU on Sunday can potentially hand Churchill Brothers the I-League title for the third time in their history if Gokulam Kerala FC drops points against Mohammedan Sporting later in the day. However, the task of defeating an underdog like TRAU is not as easy as it could appear for the Red Machines.

The last time the two sides met, Clayvin Zuniga’s strike was cancelled out by Bidyashagar Singh, in a heavily contested match that saw both sides create multiple chances as both shared points in a 1-1 draw. But with TRAU flying-high and notching five successive wins on the trot, Churchill Brothers would have to show their champion attitude and get the job done.

In retrospect, Churchill Brothers have only themselves to blame, for being in this position. But Fernando Varela’s side are determined to crown themselves as the champions of the I-League in a season where the Red Machines have led the table for much of the season, going on an 11 match unbeaten streak before losing.

Speaking at the official pre-match press conference, coach Varela said, “We have to be focused and correct our mistakes. We’ve the same chance to win the I-League as before, and nothing changes for us. We have to stay on course and stay determined.”

“Our team has already shown the level of football we can play in all the matches that we have played. We need to believe in our ability with the ball and have to trust ourselves. The boys will fight till the final second in the clash tomorrow (Sunday) and aim to get a positive result.”

“TRAU is a tough opponent, they have good Indian players and they have the ability to fight for all the time. They have quality players and will be looking to make the most of their chance on Sunday. However, we want to have control of the game and be ready for TRAU’s counter-attack football,” he added.

Defender Kamran Farooque said, “It is like a final tomorrow (Sunday) for us and we will do our best to win it. We have to utilise whatever we have learned during this season, to the best of its use. We have to do the hard work on the pitch and we will aim for nothing less than a win.”