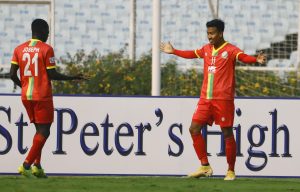 Not many could have predicted TRAU to be challenging for the I-League title this season, and rarely could anyone have predicted that the Manipur-based side would be just a win away from lifting the coveted trophy. A revelation in the I-League this season, Nandakumar’s TRAU has been the perfect rhetoric to the question of what does it take to be a champion. The answer – sheer determination.

A win against Churchill Brothers at the Kishore Bharati Krirangan Stadium on Sunday, March 21 could potentially hand TRAU their first-ever I-League title if Gokulam Kerala FC drops points later in the day when the Malabarians face Mohammedan Sporting. The kick-off for TRAU’s clash against the Red Machines is slated from 2pm IST and the match will be broadcast on 1Sports, whilst being live-streamed on their Facebook page.

TRAU’s bloom in form came at the perfect timing when other teams in the title challenge fray saw a slump. With Churchill Brothers, Mohammedan Sporting, Real Kashmir all losing points in the championship stage, TRAU gained an advantage – winning all of their last five games – to be on the cusp of lifting the trophy.

But the icing on TRAU’s cake is undoubtedly Bidyashagar Singh. The nimble-footed forward has burst onto the scene scoring two successive hat-tricks, propelled by a stellar partnership with fellow forward Komron Tursunov. With 11 goals to his name, Bidyashagar’s ability to convert half-chances could prove to be pivotal in Sunday’s clash against Churchill Brothers.

Speaking at the official pre-match press conference, head coach Nandakumar said, “We never thought that we would be in this position to contest for the I-League title. We were always thinking about surviving relegation and then getting into the top six. Wherever we are right now is just the result of our hard work and determination.”

“Churchill Brothers are a very good side and it will not be easy to play against them. We will be without the services of Komron (Tursunov) so that is a big blow for us as well,” informed Nandakumar.

Perhaps TRAU would take inspiration from Aizawl FC’s title win in the 2016-17 season when Khalid Jamil had led the people’s club to their first-ever I-League title with Aizawl being the underdogs for much of the time that season.

“Absolutely! A lot of the boys have come up from local clubs where they did not even have the experience of playing in the Hero Second Division League. They are directly coming from the grassroots and almost all of them have heard Aizawl’s story,” Nandakumar opined.

“Everyone is eager to play in the squad and give their level best. We are ready to give more than cent percent tomorrow (Sunday). We will try our level best to win the match,” he added.

Defender Helder Lobato explained how the team is shaping up. “Not a lot of people believed in us, but we believed in ourselves and now we believe that we can be champions. We want to make our fans happy and although we never thought of winning the championship, we have a good chance of doing so.”