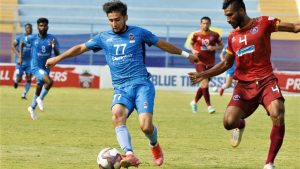 Churchill Brothers opened their I-League Phase 2 account with a hard-fought win over Rajasthan United at the Naihati Stadium. Towards the end of the game, Churchill Brothers were reduced to ten men but managed to cling on and walked away with all three points.

Rajasthan United started the game on the front foot. A solid start saw them retain possession and move the ball around very easily, pressing Churchill Brothers into their own half. Ten minutes in, midfielder Omar Ramos tested Shilton Paul from range. The keeper was on his toes to keep the ball away from goal. Ramos’ attempt came right after Pedro Manzi’s cross was cleared right in front of goal.

From the left flank, Abhishek Ambekar and Tarif Akhand were putting some decent crosses in but Suresh Meitei was always alert inside the Churchill Brothers box to intercept almost all the Rajasthan United attacks.

It took them a while, but Churchill Brothers finally made their way forward with the ball. Momo Cisse played it forward to Kingslee Fernandes, who played it to Komron Tursunov. Tursunov put it clean through to Gnohere Krizo but the striker could not keep it on target.

A little over ten minutes later, Pedro Manzi headed the ball into the back of the net for Rajasthan United only to see the offside flag go up against him. Moments later, Manzi was desperately appealing for a handball in a crowded Churchill Brothers penalty area. The referee was not interested and asked him to play on.

Five minutes from half time, both coaches were warned and asked to calm down by the referee. Tensions were rising in the technical area and a few words were exchanged between the two Spaniards.

Heading into the first half stoppage time, Churchill Brothers doubled their lead. Fernandes entered the box and crossed it towards Tursunov but Akhand got in the way and ended up deflecting the ball into his own net in the final few minutes of the first half.

Fernandes found himself in a good position again, this time on the right side and picked out Krizo, who was facing the goal from a very acute angle. His eventual shot was saved by Roy in the last minute of first half stoppage time.

Four minutes into the second half, Kenneth Ngwoke tried his luck from range but the keeper was able to save it comfortably. At the other end, Momo Cisse denied Alocious after he was picked out brilliantly by Pedro Manzi. Substitute Pritam Singh tried to pick out Alocious but the cross was intercepted and cleared by Meitei at the heart of Churchill Brothers’ defence.

Rajasthan United opened their account mid-way through the second half. Biswa Darjee’s venomous strike from distance was saved by Shilton Paul. However, the ball fell right in front of Pritam Singh, who buried the ball in the back of the net to cut the deficit down to one.

Right after the goal, an injury to Momo Cisse added more weight to the concerns of Churchill Brothers.

Bhaskar Roy denied Ngwoke on the counter attack as the game opened up after Rajasthan United’s goal. Churchill Brothers’ coach Antonio Rueda Fernandes was livid on the touchline and ended up receiving a yellow card. Tensions were high and frustration crept in towards the closing stages of the game as seven minutes were added on.

Quan Gomes, who had come on as a half-time substitute for Churchill Brothers, received his marching orders after two quick yellow cards as Churchill were down to ten in second half stoppage time.

Rajasthan United probed forward in the dying minutes but poor finishing from their own players coupled with chaotic defending did not result in another goal.

A hard-earned victory for Churchill Brothers means that they have stretched their winning run to five games. They are now level on points with Roundglass Punjab. Rajasthan United will be concerned now as they only have one win in their last six games.