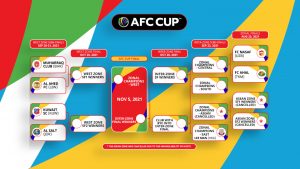 The pathway to the AFC Cup 2021 Final will be unveiled for participating clubs when the Knockout Stage draw is held virtually in Kuala Lumpur, Malaysia on Wednesday, August 4.

With all the Knockout Stage matches changed to single leg ties from the home-and-away format, the AFC Cup campaign is poised for an exciting finish with clubs aiming to be crowned the 2021 champion.

The Knockout Stage draw will see participating clubs placed in two Pots – West Zone and Inter-Zone Play-off – based on their Zonal representations without any seeding or country protection.

Following a gripping Group Stage in the West Zone, the winners of the first West Zonal Semi-final between Muharraq Club of Bahrain and title holders Al Ahed FC of Lebanon will face the winners in the match between Kuwait SC and Al Salt of Jordan.

With a place in the AFC Cup Final at stake, the winners of the West Zonal Semi-finals will be placed in the West Zone Pot with the first ball drawn selected as host club while the second team will be the away club in the West Zone Final scheduled for October 20.

In the Central Zone, FC Nasaf from Uzbekistan will host the Zonal Finals on August 25 against FC Ahal from Turkmenistan with the winners advancing to the Inter Zone Semi-final on September 22.

Due to the cancellation of the ASEAN Zone matches, the three Zonal champions from the Central, South and East Zones will be drawn into two pairings where one club will get a bye to the Inter Zone Final.

The two clubs drawn against each other will play a single match to determine the winners who will advance and host the Inter Zone Final on October 20. The champions will then qualify to the AFC Cup Final on November 5 to be staged by the West Zone winners.

As XtraTime reports, ATK Mohun Bagan have named their 22 players squad for their AFC …