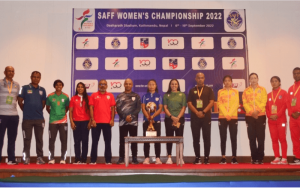 The SAFF Women’s Championship is all set to kick off in Nepal from tomorrow on September 6 at the Dashrath Stadium in Kathmandu, and the coaches of the teams maintain that it will be a competitive tournament for each of them.

The Blue Tigresses have been pitted in Group A alongside Pakistan, Maldives and Bangladesh.

Speaking to the media ahead of the start of the tournament, India head coach Suren Chettri stated how important it is to win another SAFF title this year.

“We are prepared for the Championship and the girls are really motivated to start the matches. They are working hard for another title to defend,” said Suren.

“It’s always easy to win a championship but to maintain the winning streak, is another challenge we need to overcome,” he added.

Bangladesh head coach Golam Rabbani Choton, said, “Our girls are ready to take each match at a time and it is going to be a healthy competition”.

Maldives head coach Ahmed Dunga Shareef feels that they are placed in a tough group but are ready for the challenges.

“We are in a group of death but we hope to give our best. We want to give fight to every team as we know it is going to be a competitive tournament,” said Shareef.

The Senior Women’s National team of Pakistan is back on the international stage after eight years and seems confident ahead of the tournament.

“Playing after such a long time is exciting but at the same time is a bit challenging. We have tried to put together our team, and have got good players. Pakistan is a very competitive team and will fight till the end and play good football”, stated head coach Adeel Rizki.

The SAFF Women’s Championship kicks off at the Dashrath Stadium in Kathmandu on September 6 at 5.15pm IST, when Bhutan take on the hosts Nepal.

Meanwhile, India begin their campaign on September 7, against Pakistan at IST 12.45 PM. The matches will be streamed Live on the Eleven Sports platform.