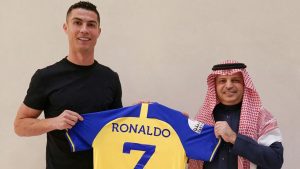 The two and a half year deal until summer 2025 is said to be worth 500 million US Dollars.

Cristiano Ronaldo is said to be “eager to experience a new football league in a different country.”

Cristiano Ronaldo added, “I am fortunate that I have won everything I set out to win in European football and feel now that this is the right moment to share my experience in Asia.”

“The vision with which Al Nassr operates is very inspiring, and I am delighted to join my teammates, so that together we can help the team achieve greater success,” he added.

Al Nassr from the capital Riyadh are nine-time Saudi Pro League champions and they described the signing as “history in the making”.

The club said it would “inspire our league, nation and future generations, boys and girls to be the best version of themselves”.

Ronaldo heads to Al Nassr after Manchester United terminated his contract while he was with Portugal at the 2022 FIFA World Cup in Qatar.

He is also the top scorer in the UEFA Champions League and with the Portuguese national team with whom he won UEFA Euro 2016.