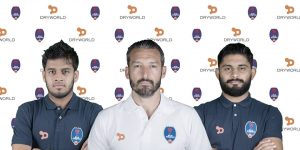 Indian Super League franchise Delhi Dynamos FC has announce their new partnership with DRYWORLD Industries, which will see the DDFC squad wearing the DRYWORLD kit on the pitch throughout their campaign in an initial two year contract.

DRYWORLD are fast becoming the go-to brand for athletes following a number of ground-breaking deals across the globe.

Speaking about the new association, Craig Stewart, DRYWORLD Director of Global Operations, said, “We are delighted to partner with Delhi Dynamos ahead of the Indian Super League season. The Indian Super League continues to go from strength to strength with Delhi Dynamos very much at the forefront of driving football in India. India is a vital component in our continued global expansion and we look forward to working with the team at Delhi Dynamos for many years to come.”

Delhi Dynamos FC are known to be a club that believes in taking care of their players and making them comfortable off and on the pitch. DRYWORLD’s core philosophy of ‘staying dry’ fits perfectly with Indian weather conditions, and the club feels that the comfortable, sweat-resistant kit will help the team play better.

“I’ve spent only a week in India, but to me, it seems like Indian weather conditions are hot and humid. Football is a physically strenuous sport, and conserving energy is critical for success. DRYWORLD’s innovative sportswear reduces moisture retention. This will keep our players fresh and more energetic which, in turn, will help them perform better”, said Delhi Dynamos head coach, Italian World Cup-winner Gianluca Zambrotta.

Delhi Dynamos stars like Florent Malouda, Toni Doblas, and Anas Edathodika, along with several others, will be seen on the pitch sporting DRYWORLD’s latest line of products.

Delhi Dynamos FC president Prashant Aggarwal is particularly pleased with this partnership. Speaking to media, he said, “At DDFC we believe in dreams, and our dream is to be the best. As is DRYWORLD’s. We want to be the best football club and DRYWORLD the best sportswear brand. We’re both passionate about football and we hope that this association will grow from strength to strength!”

Started in 2010 by two former rugby players, Matt Weingart and Brian McKenzie, DRYWORLD looks to give all existing sportswear brands a run for their money.

DRYWORLD’s new DRYSKYN technology was developed specifically for athletes to perform in a number of challenging environments, supporting the athlete by stabilizing their heat signature, managing moisture and allowing the athlete to move freely.