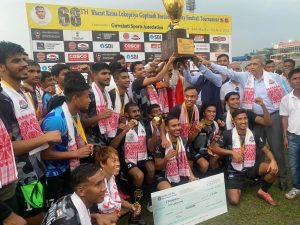 Delhi FC were crowned champions of the Bordoloi Trophy as they beat Nagaland Police in the final of the 68th edition of the tournament on Sunday, April 3.

It was an excellent display from Delhi FC throughout the tournament over the course of five games. They won all five, scoring 10 goals in the process and conceding just one.

Their journey began against Assam Police in the first group game, but Delhi FC cruised past them 2-0 with the help of a brace from Kosuke Yamazuki.

Their next group game was against Assam Rifles, who have a rich history in Indian football, and they’ve also won the Bordoloi Trophy once. Delhi FC made light work of them as well, overcoming them 2-1.

Delhi FC’s third and final group game was against Daimalu Club, and a 1-0 win was enough for them to get to the semifinals with three successive wins.

In the semifinal, it was a tough challenge against Chirang Duar, who had beaten former I-League team Shillong Lajong FC and drawn with ISL club NorthEast United FC Reserves. But Delhi FC were up for it as they registered their biggest win of the tournament at the most crucial stage as they thrashed their opponents 4-0 to storm into the final.

Nagaland Police had a good run in the tournament up until the final, but Delhi FC were clear favourites. It was indeed a hard-fought contest, but Delhi FC proved to be just too strong.

In the first half, Delhi FC had a gorgeous opportunity to go ahead after a dash from midfield by Hazra. He fed Arthur, who went into the box, cut the ball back but his shot blazed over the bar.

In the 70th minute, after having missed many chances to take the lead, Kosuke Yamazuki burst into the box and curled the ball into the far corner to give Delhi FC the lead.

Delhi FC held onto it, and the solitary goal was enough to give them the win and indeed the Championship.