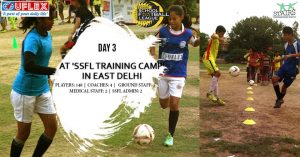 The STAIRS Schools Football League (SSFL) concluded its first phase of grassroots selection camps for Under-14 and Under-17 players across Delhi. The camps were conducted at 15 locations across four zones of Delhi and witnessed over 3,000 footballers turning up for the trials.

The camps were conducted by the Delhi Soccer Association with support from the Society for Transformation, Inclusion and Recognition through Sports (STAIRS) to select promising players for SSFL training camps. DSA coaches picked up 477 footballers and will be conducting three-day training camps at four locations – GBSSS 1 at Keshav Puram, Jal Vihar Grounds at Lajpat Nagar, Yamuna Sports Complex in IP Extension and Karala Village Stadium.

The top performers chosen at the three-day training camps will get an opportunity to showcase their talent as a part of the STAIRS teams that get a wildcard entry to compete with top teams of Delhi schools at the next SSFL.

Understanding the potential of the grassroots camps, Members of Parliament of Delhi including Meenakshi Lekhi from New Delhi, Dr Udit Raj from North-West Delhi and Shri Maheish Girri from East Delhi had engaged their teams to ensure that the camps get maximum participation.

Siddhartha Upadhyay of STAIRS said, “Each year when the teams go to the grassroots we get overwhelmed by the response we get from the children. It seems like they practice and wait for about an year for these trials. Although it sounds like an exciting exercise, the fact is that these children do not have any more platforms to showcase their talent and rarely get an opportunity to engage with professionals.”

“The objective of these camps is to reach out and create opportunity for as many children as we can. Many of those who come for trials do not have access to playing facilities in their respective schools or neighbourhood. Some of them do not even get to go to school. Hence, SSFL grassroots camps becomes an essential engagement point for them.”

“Interestingly, with over a decade of engagement at the grassroots, we have been able to make a sports resource map of entire Delhi. Team SSFL now knows each zone by heart and can tell you where you may spot the best strikers, which area of Delhi has best defenders and can also pinpoint the areas where children are least interested in sports. Our efforts are now focused at making best use of this understanding of grassroots sports and implement programmes that can create opportunities for promising players.”

Cited as one of the world’s largest talent scouting and training programme for football, SSFL has become one of the most significant platforms for football fraternity seeking to acquire talent at an early age. While many officials and individuals from professional bodies keep their eyes on the budding players during the matches, selectors from international foreign clubs watch ‘live streaming’ of important matches and even call for recorded videos to see performance of promising players.