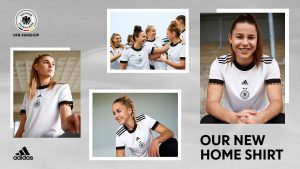 The Germany women’s national team’s new home and away kits have been revealed by the DFB’s partner adidas. The DFB-Frauen will wear these kits at the 2022 UEFA Women’s European Championship in England. In contrast to the classical white home jersey, the away kit has an eye-catching mint-green design. In addition, they will be the first DFB-Frauen kits available in men’s sizes.

What makes the kits stand out above everything is their slim-fit, detailed design. The flag of Germany can be seen on both the collar and sleeves of the home jersey, and in the middle you will find the adidas logo and the DFB logo, with its two stars on top to signify the team’s two World Cup victories. The iconic three stripes are visible on the yoke of this shirt, and the retro, 80s look is rounded off with classic white socks, while mint-green socks complete the away kit. Player names and numbers on the kits will be printed in black on the home kit and in mint-green on the away kit.

The new kits combine modern elegance with top-quality materials. They’re both “Primeblue” products and are made from a high-performance recyclable material with Parley ocean plastic –plastic waste which has been collected in coastal regions and recycled before it does any damage to the ocean. The away strip’s subdued pattern is inspired by oceanic movements and aims to draw attention to the potential fate of the oceans.

The home kit will be worn for the first time during the 2023 FIFA Women’s World Cup qualifier against Portugal on Saturday, April 9 in Bielefeld.