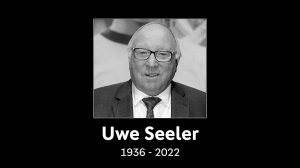 The German Football Association (DFB) is mourning the loss of honorary Germany captain Uwe Seeler, who passed away on Thursday, July 21 at the age of 85. His performances, goals and deeds will never be forgotten at the DFB.

DFB president Bernd Neuendorf said, “With Uwe Seeler’s passing, we lose one of the best footballers Germany ever had. He was the second honorary captain of the DFB after Fritz Walter and was an idol for generations – he was a true role model. Many of his goals will forever be remembered, such as his legendary backwards header in the 1970 World Cup quarter-finals against England. But Uwe Seeler made such an impression off the pitch as well. Everyone will remember him for his down-to-earth nature, his humility, and his bond with his hometown of Hamburg. With his foundation, he also offered support to people in need, as well as being passionately involved in the DFB’s Sepp Herberger Foundation. We are all deeply saddened by his death. Uwe Seeler leaves a hole in the DFB and all of German football. We will miss ‘Uns Uwe’ greatly.”

Germany head coach Hansi Flick said, “Uwe Seeler was a role model for generations of Germany internationals. He won so many hearts with his humble and down-to-earth approach and his name is synonymous with loyalty. He played at four World Cups himself, going on to accompany us at tournaments as honorary captain and part of the DFB delegation, like at South Africa in 2010. We always enjoyed having him around – he inspired us. All of us in the national team and at the DFB will miss him deeply.”

A role model for fair play

Uwe Seeler won 72 caps for Germany, scoring 43 goals in the process. He featured at four FIFA World Cups, getting on the scoresheet at each of them. He captained the national team at both the 1966 and 1970 FIFA World Cups, finishing a runner-up in England and taking home a third-place medal from Mexico. His club career was spent exclusively at Hamburger SV, who he played for 476 times, netting a whopping 404 goals. ‘Uns Uwe’ (Our Uwe), as he is affectionately known, was a 1960 German champion and 1963 DFB-Pokal winner. He also finished as the Bundesliga’s top scorer in its inaugural 1963/64 campaign, finding the back of the net 30 times. He was honoured as Germany’s Footballer of the Year on three occasions.

Uwe Seeler set standards both on the pitch and off it, particularly when it came to fair play. The best example was how he dealt with the unjustness of so-called “Wembley goal” and the resulting loss in the 1966 FIFA World Cup final. With his fair wishes of congratulations, he set an example for decency and respect. Those actions saw Seeler and his teammates earn sympathy for German football and Germans both in Germany and across the world. He became the first footballer to be the recipient of Germany’s Great Cross of Merit in 1970, and was also awarded the DFB’s Golden Badge of Honour in 2001 and was inducted into German football’s Hall of Fame in 2018.

DFB no longer to use Germany’s brand name ‘Die Mannschaft’!