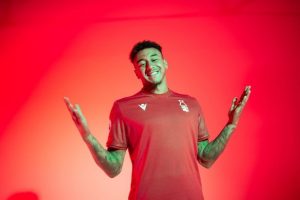 Nottingham Forest are delighted to confirm the signing of Jesse Lingard.

Lingard has also amassed 32 England caps to date and made his debut in 2016 before playing an integral role as the Three Lions reached the semifinal of the 2018 FIFA World Cup, scoring one goal and assisting two.

The former Red Devil brings a wealth of Premier League, UEFA Champions League and international experience to The City Ground and was a key member of the Manchester United side that lifted the FA Cup in 2016, scoring the winning goal in extra time against Crystal Palace at Wembley.

A player for the big occasion, Lingard was also on the scoresheet in the 2017 EFL Cup final as Manchester United defeated Southampton 3-2, with Jesse also playing a key role as the Red Devils lifted the Europa League trophy that same season.

Jesse joined West Ham United on loan for the second half of the 2020/21 Premier League campaign and set the London Stadium alight with a string of impressive performances, netting 9 goals in 16 appearances whilst also contributing 5 assists.

Everyone at Nottingham Forest is delighted to welcome Jesse to the club and we look forward to seeing him pull on the Garibaldi shirt at the World Famous City Ground.