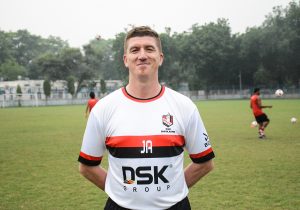 I-League side DSK Shivajians Football Club today announced the appointment of John Andrews as the new Strength and Conditioning Coach for the clubs first team.

John is a UEFA ‘A’ License Coach, who has expertise in strength and conditioning, joins First Team Manager Dave Rogers backroom staff for the season ahead.

Andrews, 37, was a professional footballer before he retired and ventured into coaching. He coached Hviti Riddarinn and Afturelding Women’s Team in the past. Following the latter, he diverted his focus on to strength and conditioning of players, developing FRP Fitness for regular people.

Talking about John’s appointment, Dave, said: “I have known John for many years throughout my football career. We played against each other many times. He has always been a man of integrity and complete professionalism in the way he conducts himself. I decided to bring in John because his knowledge and attention to detail in Strength & Conditioning which is second to none.”

John is also an ISSA Certified Personal Trainer with a Degree in Physical Education and Health.

Expressing his excitement on joining DSK Shivajians, John said: “It is an honour and a pleasure to be on board the most exciting and developing club in India. My goal here is to improve the strength, well-being, and overall health of the players and to push DSK Shivajians to the next level of our football journey. Thank you for the opportunity, and I look forward to doing my best for such a fantastic club and manager.”