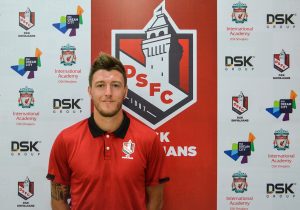 DSK Shivajians FC has confirmed the signing of former Irish youth international Shane McFaul on a two-year deal (2016-18). The midfielder joins the Pune-based squad after plying his trade in England, United States of America, Finland and Ireland.

His playing career so far has been decorated with two major honours with Irish sides. The first being an FAI Cup winner with Sporting Fingal (2009), followed by the League of Ireland Premier Division title with Dublin-based St. Patrick’s Athletic FC in 2013.

For the record, Shane has been capped numerous times as a youth player at various levels (Under-14 to U-21) for the Republic of Ireland.

The 30-year-old is a ball-winning midfielder who is equally adept distribution and thus, becomes the second foreign player to be signed by DSK Shivajians FC for the season ahead. Earlier, the club renewed the contract of Spaniard winger Juan Quero.

The central midfielder began his career playing local club football in Ireland when he caught the eye of League One side Notts County, and was promoted to the senior squad in 2002 at the age of 16. In 2005, he moved to American side Virginia Beach Mariners, where he spent a year, before signing for UCD Dublin. In January 2008, he signed for Brighton and Hove Albion FC where he made his debut in a 3-0 victory over Crewe Alexandra.

Later that year, he sealed a move back to UCD Dublin before moving to Sporting Fingal for the 2009/10 season. He then moved to St. Patrick’s Athletic FC in 2011. In 2012, he had a successful stint in Finland with FC Haka which led to St Patrick’s Athletic FC bringing him back for another season. In 2014, he signed for FC KTP in Finland and captained the side in 2016 and played a major part in their promotion-winning campaign, before turning his eyes to the Indian subcontinent and landing a contract at DSK Shivajians FC.

First Team Manager Dave Rogers, said: “I am thrilled to have signed Shane McFaul. I have monitored Shane’s progress since he was a young player in the League of Ireland Premier Division and his rise and progress in England and Finland.”

“Shane is a fantastic leader on and off the pitch and an all round midfield player possessing all the attributes I was looking for. His profile and character makes him the perfect signing in my philosophy and direction on how I intend to take the club forward.”

“He possesses excellent game intelligence and awareness both in and out of possession. Shane’s influence and passion will be felt throughout the whole club especially the younger players who have developed through our academy system. His presence, knowledge and sole professionalism will have a positive impact overall. I look forward to working with Shane daily and in the long term.”

Shirish Kulkarni, DSK Shivajians FC president, added: “I would like to welcome Shane to India, the DSK family and wish him all the very best for the season ahead. Shane’s experience of playing several leagues in Europe will help with the balance of the squad. He will have an important role to play and has a lot to offer.”

“It was always something I wanted to do… come and play in Asia as I’ve played in many other footballing cultures and now, in India.”

“Once I spoke to Dave about his plans and the project I knew at once I really wanted to be part of this club.”

“I know the I-League is a growing league and I am very excited for the new season as Manager Dave Rogers is assembling a top quality squad for the season. There are a lot of talented young players and many internationals players.”

“I’ve been blown away by the facilities at DSK, the best of any club that I have played for.”

“With the experience Dave (Rogers) and Barry (Knowles) have, I know I am going to improve so much as a player and I am sure we are going to have a strong campaign.”

McFaul has already joined the squad for pre-season at the DSK Dream City Football Fields.