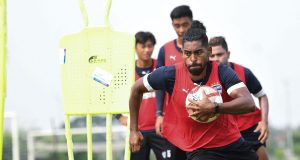 Bengaluru FC Head Coach Simon Grayson said his side are keen to take another step towards a first-ever Durand Cup final when they face reigning ISL champions Hyderabad FC, at the Vivekananda Yuva Bharati Krirangan, in Kolkata, on Thursday. Bengaluru, who ran out 2-1 winners over Odisha FC in their quarterfinal, are up against Manolo Marquez’s Indian Super League champions, who made the final four with a 3-1 win over Rajasthan United FC.

“It’s going to be a tough game against Hyderabad, who are the side that won the Indian Super League last season. They’re a very talented team with a good strike force that also has last season’s leading goal scorer (Bartholomew Ogbeche). While I’m certain that we will respect them on the pitch, we will continue to focus on ourselves and the trouble we want to cause them,” Grayson said, addressing the media.

A Roy Krishna strike in the final minute of extra-time pulled the Blues over the line against Odisha FC while goals from Ogbeche, Akash Mishra and Javier Siverio gave Hyderabad FC a 3-1 over Rajasthan United on Monday. Asked about the encounter, Grayson mentioned that he was looking to find the right balance as the Indian Super League campaign fast approaches.

“If there are going to be goals, we want to be the ones scoring them. Like any football match, if we defend our 18-yard-box well and be clinical in attack, it gives us a fantastic chance of winning and making the final. As a group, we’ve been together for nearly eight weeks, and have put in a lot of work on the training pitch. There’s a spirit about this team now and we’re getting stronger physically and mentally. We want to be able to find the right balance ahead of the bigger picture, which is the ISL season,” added Grayson.

Nigerian striker Ogbeche is the visitors’ top-scorer in the Durand Cup with five goals to his name, while Sivasakthi Narayanan’s strike against Odisha steered him clear atop the charts for the Blues with four.

Kick-off at the Saltlake Stadium is scheduled for 6 pm, with telecast on the Sports18 Network and live streaming available on JioTV and VOOT.