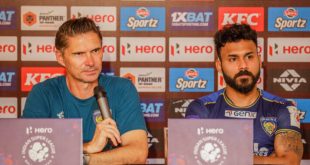 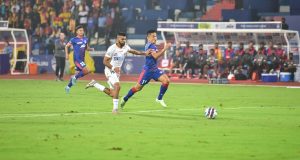 Bengaluru FC suffered a third defeat on the spin, going down 0-1 to East Bengal FC at the Sree Kanteerava Stadium in Bengaluru on Friday. Former Blues’ striker Cleiton Silva got on the end of a Naorem Mahesh Singh cross in the 69th minute to give the Kolkata side all points on the night.

Simon Grayson started with Sunil Chhetri, Roy Krishna and Javi Hernandez for the first time this season, with Udanta Singh too getting a nod from the boss. East Bengal, meanwhile, started with an attack that included Suhair Vadakkepeedika, Thongkhosiem Haokip and Cleiton.

Hernandez created the first big chance for Bengaluru FC when he slipped Chhetri through on goal, only for two East Bengal defenders and Kamaljit Singh to smother the Bengaluru FC captain’s attempt at a hit.

In a half that didn’t see too many chances, Sandesh Jhingan turned up with a crucial last-ditch tackle to deny former Bengaluru FC striker Cleiton who would have found himself with just Gurpreet to beat. The visitors were forced into a change early in the second half when Australian midfielder Jordan O’Doherty pulled up with an injury, and was replaced by Alex Lima.

Bengaluru FC could have gone ahead through Krishna at the hour-mark after a string of delightful one-touch football had Hernandez slip the Fijian through. With East Bengal defenders in his trail, Krishna had the far post to aim at, but he couldn’t manage a clean shot, and ended up scuffing his attempt.

Instead it was East Bengal that broke the deadlock after Naorem Mahesh Singh won a race with Suresh Singh on the counter, before squaring the ball for Silva who tapped into an open goal. The goal forced Grayson to ring in changes, bringing on Leon Augustine and Danish Bhat for Suresh and Roshan Singh.

Bengaluru FC pushed the envelope until the final whistle, but a combination of lackluster finishing and stubborn defending saw the visitors eke out the win. Bengaluru FC travel to Mumbai next, where they take on Des Buckingham’s Mumbai City FC at the Mumbai Football Arena on November 17. 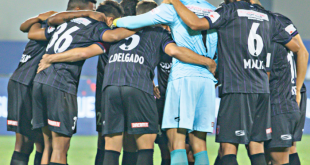