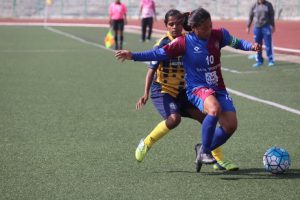 Defending champions Eastern Sporting Union started on a winning note as they beat Indira Gandhi Academy for Sports & Education 3-2 in the opening fixture of the Indian Women’s League 2017-18 at the Jawaharlal Nehru Stadium here in Shillong on Monday, March 26.

Eastern Sporting Union took the lead in the 25th minute through Kashmina before Paromita equalised in the 43rd for IGASE. Two goals from Prameshwori in the 47th and 59th minute was difference maker with Sandhiya scoring the 2nd goal for Indira Gandhi Academy for Sports & Education in the 48th.

Eastern Sporting Union started out strongly as the strung together a wave of attacks. Prameshwori and Kashmina combined well to trouble the Indira Gandhi Academy for Sports & Education backline. Sweety came close with her free-kick in the 16thminute, which just brushed the crossbar on its way out before Prameshwori forced a save out of goalie Crystal in the 20th.

The deadlock was finally broken in the 25th when Kashmina hit the back of the net. A goal line save by Anjali in the 31st kept the score line intact as Indira Gandhi Academy for Sports & Education struggled to contain the wave of attacks.

A chance for an equaliser came in the 42nd minute when Indira Gandhi Academy for Sports & Education were given a penalty but Sandhiya scuffled the shot for Panthoi to make an easy save. A minute later though Paromita made the most of a goal mouth melee to make 1-1 as the teams headed into half-time.

The second half began with a bang as Prameshwori struck with a wonderful strike in the 47th minute to make it 2-1. The celebrations though were short lived as Sandhiya made up for her scuffed penalty to equalise in the 48th.

The goal vitalised the team from down South as Sandhiya, Pradeepa and Radhika gave a lot of trouble to the Eastern Sporting Union back line. Umapati Devi and Manisa Panna being forced to make a lot of crucial interceptions to keep the strikers at bay.

Goalkeeper Panthoi was also kept on her toes with a couple of crucial saves off Sandhiya and Pradeepa. Then, almost against the run of play Prameshwori struck from a distance. Her long ranger bulging the back of the net in the 59th minute.

Thereafter the Indira Gandhi Academy for Sports & Education came close a couple of times but the Eastern Sporting Union defenders stood tall at the back. Sulatana had a chance to put the match to bed in the 91st but her shot went wide as the game finished 3-2 in favour of the defending champions.

Previous From the Ocean to the Grass: adidas’ sustainable warm-up jersey for Germany’s ‘Die Mannschaft’!
Next UEFA strengthens dialogue with European institutions!