EBRP is all set to enhance its footprint globally as they join hands with BHF as the Fan Engagement Partner for ISL UK!

Press Release 2021-08-20 Indian Super League Comments Off on EBRP is all set to enhance its footprint globally as they join hands with BHF as the Fan Engagement Partner for ISL UK! 409 Views 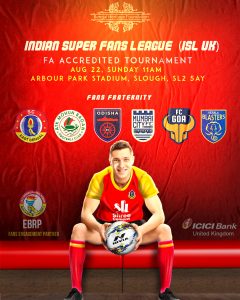 The Indian diaspora in the UK come together for a community football day to kick start celebrations for the 75th year of Indian Independence on Sunday, August 22.

Bengal Heritage Foundation (BHF) is organizing a community football day for the Indian diaspora and the British citizens on 22nd August, as part of the start of the celebrations for the 75th year of Indian Independence. The one-day event named the Indian Superfans League UK (ISL UK) is inspired by the premier Indian football league – the Indian Super League. There are 6 fan clubs from the premier clubs playing in the ISL, who would be representing their clubs in the ISL UK.

The 6 fan clubs participating in the tournament are SC East Bengal Fans, ATK Mohun Bagan Fans, Odisha FC Fans, Mumbai City FC Fans, FC Goa Fans, and Kerala Blasters Fans. The fan clubs have been planned and organized in discussion with the ISL team owners and their active support. The team owners have shared their home jerseys for fan teams and shipped them from India. EAST BENGAL the REAL POWER (EBRP), is proud to be the Fan Engagement Partner for this tournament and wishes good luck to all the 6 teams and the tournament all the very best.

In a first, this tournament is sanctioned as a community tournament by the Football Association (FA) in England. The matches will be officiated by FA licensed referees.

In her message to the organizers and the teams, Gaitri Issar Kumar, the High Commissioner of India in the UK, noted, “It gives me great pleasure to note that the Bengal Heritage Foundation has taken the lead in bringing together the diverse communities of the Indian diaspora in the Indian Superfans League UK. It is a very appropriate way to celebrate 75 years of Indian Independence. I look forward to a day when India will proudly rejoice in being represented by Indian-origin superstar footballers globally. I congratulate the Bengal Heritage Foundation for their initiative and offer my best wishes to them and to all the participating players for the success of the tournament! May the best team win!”

Rohit Vadhwana, First Secretary (Economic, Press & Info), High Commission of India, London will join the event as the Guest of Honour along with his wife, Femida Shaikh.

“This is one of the many projects we are currently doing to expand our collaboration across Indian diaspora communities and British citizens, and what better way than football, given England’s success in Euro 2020. We want to encourage more people from the Indian diaspora to take up football as a sport. There will be many more such initiatives to come up in the next 12 months, leading up to India’s 75th Independence in 2022,” said Sourav Niyogi,

Founder Member of EAST BENGAL the REAL POWER (EBRP), Rabi Shankar Sen said, “EBRP is very happy and proud to be the Fan Engagement Partner for Indian Superfans League UK (ISL UK). Bengal Heritage Foundation has taken this wonderful initiative to bring the Indian diaspora together and EBRP would actively engage with the football fans across India to make this a great success here as well. With this, we believe that football will bring the communities together more than ever, especially during the time when we are seeing such unrest in other spheres of life.”

“When we approached the Indian Football clubs and their fan clubs in the UK with our idea about the ISL UK, we were not sure about how the responses would be. However, to our delight, all the teams jumped at the idea and showed huge enthusiasm. Without the positive responses from the clubs and the communities, this would not have been possible. Looking forward to more such cross-community events in the future,” said Sarbartha Chakrabarti, the key organizer of this event and an IT professional based in London.

Apart from the main attraction – the football tournament on the day, BHF has also organized festive shopping and kids’ entertainment making it an exciting family day event.

The event is being followed by many across the globe. Kalyan Kar, a Kolkata based football fan, noted, “I am loving how Bengal Heritage Foundation, is igniting the passion of football among the diaspora by bringing together the overseas Indian football lovers in the United Kingdom, by organizing the Indian Super Fans League in the UK for the first time. This is the most effective way to engage the global fans and to promote the growing excitement of Indian football, which boasts of the most keenly contested Football Derby in Asia.”

Dr. Tanmoy Ganguly, founder member of EAST BENGAL the REAL POWER (EBRP), added, “Football Fans are the most vivacious, committed and passionate for their clubs, and we from EBRP are very excited to be a part of this. When the world is going through a tough period, this event organized by Bengal Heritage Foundation (BHF) will surely go a long way to mitigate and encourage moments of excitement and cheer amongst them. EBRP will do its very best to engage and bring the fans’ participation to the fore for this tournament.”

If it wasn’t for the COVID-19 pandemic, I would have made it across to London in support of the tournament, but still I wish the organisers, the players and everyone involved the best. Enjoy the day!!!