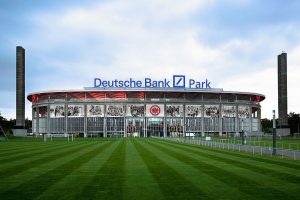 The second-largest standing terrace in the Bundesliga is under construction at Deutsche Bank Park. All you need to know about the renovation and expansion.

One of the unwritten rules at Eintracht Frankfurt is that if the captain wins the toss at home games at Deutsche Bank Park, there is only one decision to be made: staying at that end so that in the second half, the team can attack towards the north-west terrace.

As of next season, that stand will house more fans than ever before. The renovation work that began there in October is right on schedule, meaning the foundation for the expanded upper tier should be in place by mid-January and the work to increase capacity will be finished in time for the 2023/24 campaign.

In concrete terms, that means that the seating in the upper tier will be replaced by 12,900 additional standing places which, together with the approximately 7,000 standing places in the lower tier, will create the second-largest standing terrace in the Bundesliga.

Even at major events without standing areas, such as concerts or UEFA EURO 2024, Deutsche Bank Park will be able to hold around 50,000 spectators. The overall capacity at the venue will increase from 50,000 to approximately 60,000 after the refurbishment.