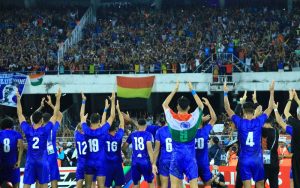 The Indian men’s senior national team’s forthcoming FIFA international Friendlies against Singapore and Vietnam on September 24 and 27, respectively, will be broadcast live in India on Eurosport.

The set of friendly matches are the Blue Tigers’ first international fixtures since AFC Asian Cup qualifiers in June 2022.

The three-team meet has been named the Hung Thinh Friendly Football Tournament with hosts Vietnam and Singapore taking on each other in the opening match on September 21. While the champions of the round-robin meet will receive a prize money of $ 30,000, the runners-up side will take home $ 20,000. The third place too carries a prize money of $ 10,000.

Head coach Igor Stimac has named a 23-member squad that will travel to Vietnam on September 20.