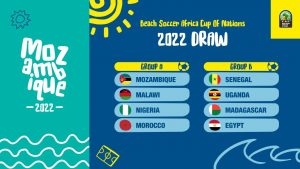 The first round of the Beach Soccer Africa Cup of Nations Mozambique 2022, scheduled for October 21-28, will be hotly contested.

The groups of the final tournament were revealed on Friday following the draw held in the Mozambican capital Maputo.

In the other group, Senegal – defending champion – will share the stage with Uganda, who will participate in their second Beach Soccer AFCON after having been semi-finalists in 2021, Madagascar, winner of the tournament organized in 2015 in the Seychelles and also Egypt, bronze medallists in 2016 and 2018.

The tournament will take place in the town of Vilankulo, known for its seaside resort and picturesque landscape, an enchanting tourist spot.