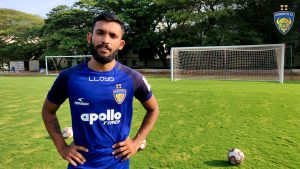 Edwin joined the Marina Machans ahead of the 2019-20 Indian Super League campaign and in his debut season, played a starring role in defence and in midfield. His partnership with the likes of Anirudh Thapa and Rafael Crivellaro was instrumental in Chennaiyin FC’s stunning run to the final.

Despite being limited to a bit-part role in the 2020-21 season that just concluded, Edwin was a dependable force whenever called upon, happy to showcase the full range of his versatility and slot in where the team required him to, even notching two assists in 14 outings, albeit most of them from the bench.

With a total of 34 Chennaiyin FC appearances to his name so far, Edwin will be raring to go in the new season, hopefully back performing in front of the ardent Chennaiyin FC supporters. The fans are a big part of his journey at the club, with Edwin also seen shaking a leg with them after victories at the Marina Arena, much to everyone’s joy.

“What I am feeling right now is beyond happiness. I am really thankful to everyone at Chennaiyin FC for showing that belief and faith in me, that they have retained me for the future,” said the Neyveli-born former I-League winner with Chennai City FC.

“I am really proud of everything I have gained in these two years so far at CFC. It is certainly a matter of huge importance for me to continue representing a two-time champion club of the ISL. The endeavour now is to keep improving and delivering more success hopefully to the club and our fans,” the Chennaiyin FC No. 8 further shared from his hometown.

Commenting on his ambitions for the future, Edwin added, “I wish to give my 200% at all times for the club. We need to bounce back and have a solid season next time around. Need to improve on the disappointments of last season and give our fans ample reason to cheer, hopefully in front of them in the stands, fingers crossed.”

“I hope I can bring happiness and smiles to the faces of all our fans. Even to my critics, I will prove myself and win you all over with my performances. I am continuing to work hard in the off-season.”

Chennaiyin FC co-owner Vita Dani expressed her delight at securing the future of a local hero like Edwin, saying, “All of us at Chennaiyin FC are overjoyed at Edwin continuing his journey with us. His versatility and humble work ethic has been testament to his time at the Marina Arena, and that is something that is not lost on us as well as our unconditional fans. I wish Edwin the very best in the coming seasons as we strive to bring success to the club in a holistic manner.”

Lastly, given the current situation that the country and the world is reeling under, Edwin had a heartfelt message to the fans. “I would also like to take this opportunity to draw everyone’s attention to the Covid surge that we are all witnessing. It is a health scare in Chennai as well as around the country. To all the fans, please take necessary precautions and do not step out of your homes unless it is absolutely necessary. This is a very crucial phase in all our lives, we must stay united in our approach. I pray to god and hope you all act responsibly,” he concluded.