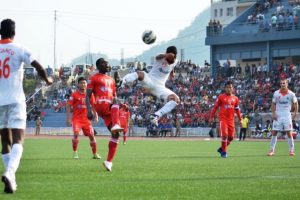 Aizawl FC were held to a goalless draw by Sporting Clube de Goa in the first leg of their semifinal clash in the Hero Federation Cup 2016 at the Rajiv Gandhi Stadium in Aizawl, Mizoram today.

With morale running high in the Aizawl FC camp after Jahar Das’s men upset the ‘Champions of India’, Bengaluru FC, in their last round of the Federation Cup, the Northeast Club started on an attacking note as the chemistry upfront, disrupted Sporting Goa’s defence.

In the 9th minute, in-form striker Joel Sunday had a chance to put Aizawl FC in the lead but the lanky forward failed to find the net, curling his shot over the bar as the opportunity went abegging. A minute later, Lalramchullova’s long shot from 30 yard out, following a clearance by the Sporting defence from an Aizawl corner kick, went inches over the bar.

Although Sporting Goa disrupted their opponents’ attacking flow by initiating counter-attacks sporadically, the Goan club failed to restrict Aizawl FC in their half as the North East Club regularly jotted down play in their final third.

With the game largely confined to the midfield, both Team found it hard to foster clear goal scoring chances, although Aizawl FC regularly tried to break past the Sporting Goa defence, while Sporting Goa tried to catch the Aizawl FC defence off guard through counter attacks.

In the 43rd minute, Joel Sunday was found inside the Sporting Goa box by a cross from the right flank, however Sunday ran into defensive traffic and was unable to make the most out of the chance. With neither Team able to take their chances in the first half, the half-time scoreline read 0-0.

Changing over and Aizawl FC had a golden opportunity to open their goal scoring chance in the 53rd minute when David’s delicious free-kick found Emanuel in the box, but the latter failed to find the net as the opportunity went abegging.

In the 62nd minute, David zipped in a cross from the right flank into the box in an attempt to find Joel Sunday. However, the Sporting Goa defence intercepted the cross and cleared it away. Substitute Albert Zohmingmawia fluffed a golden chance to give Aizawl FC the lead when he failed to find the back of an open net in the 73rd minute after a cross from the left flank, as Aizawl FC upped their ante.

In the 81st minute, Sporting Goa’s custodian Arindam Bhattacharja pulled off a top-draw save as he denied a rasping David shot from outside of the box with a strong right hand to keep Sporting Goa in the tie. Three minutes later, Victorino Fernandes was released onto goal by a long pass from the Sporting midfield, but Fernandes ran into defensive traffic and was unable to apply the finishing touches to his chance.

With both Team playing it safe in the last few minutes of the match, the first leg of the semi-final between Aizawl FC and Sporting Goa ended in a goalless draw. The second leg is slated for May 15, 2016 at the Fatorda Stadium in Goa.

@Arunfoot
Previous VIDEO: My reporting for Times Now on Munich Suburb Station Knife Attack!
Next Trials for the Mumbai FC Under-15 boys next week!