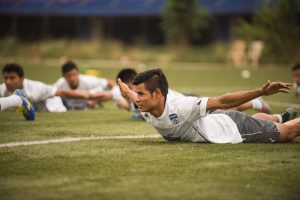 Ashley Westwood said he was confident of his side turning around a 2-1 first-leg deficit as Bengaluru FC host Aizawl FC in the reverse fixture of the Federation Cup at the Sree Kanteerava Stadium in Bengaluru on Tuesday evening.

The Blues conceded in the 90th minute in Aizawl on Saturday but came away with a vital away goal that makes tomorrow’s tie an interesting one. “We are confident of turning it around. We have a good record at home and a completely fit squad to choose from,” said Westwood while addressing the media at the pre-game press conference.

Bengaluru FC were unlucky in Aizawl where the hosts needed a couple of goal-line saves to keep the Blues from scoring early on before finding the rub of the green go their way in the second half with what looked like two definite penalties that weren’t given. “We were really good for the first 30 minutes where we had chances cleared off the line; we hit the post and had a penalty decision that wasn’t given. But maybe the fatigue kicked in and we lost concentration. We also had two 1v1s that Daniel and Udanta missed. On another night it could have been 10-2 but it just wasn’t meant to be. I’m sure we’re going to create chances tomorrow and hopefully we’ll take a few.”

Bengaluru FC landed in the city on Sunday night after a twelve-hour journey and the game will the fourth that the Blues will play in a span of ten days. But Westwood was confident that his squad will recover for the game. “The lads are alright. Travel does take a toll and we had a twelve-hour journey from door to door. But it’s the same for both teams. We have a good squad who can all come into contention. We may ring a couple of changes or we may just reload and go with the same squad given there wasn’t much that went wrong on Saturday. We’ll recover well, eat well and we’ll be ready for tomorrow whichever team we put out,” said the gaffer.

After much controversy due to a Junior Athletics meet at the Sree Kanteerava Stadium, the kick-off is going to be later at 9pm.