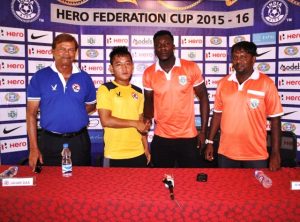 Sporting Clube de Goa will clash swords against Aizawl FC in the second-leg of their Hero Federation Cup semifinal clash at the Fatorda Stadium in Goa tomorrow. The kick-off is at 7pm.

After the first-leg of the tie between Sporting Goa and Aizawl FC ended in a goalless stalemate, Sporting Goa would be looking to bank on home advantage and defeat their opponents come tomorrow.

However, speaking at the Official Pre-Match Press Conference, Head Coach of the Flaming Oranje, Mateus Costa stated that the fixture will be a tough test of credentials. “It is always difficult to play Aizawl FC as they are a compact side, who can upset anybody on their day.”

“The equations are simple, we have to win tomorrow to go through to the Finals, and that is how we are looking at it. The boys are confident and there is a lot of positivity in the camp.”

“Tomorrow’s match is not going to be easy, but we believe in ourselves and will give our best to go into the finals”, Sporting Goa’s skipper Loveday Enyinnaya said.

Assessing the performance of his side in the goalless first-leg, Costa said, “Overall it was a fantastic defensive performance from our boys. I agree we lacked the creativity upfront but at the back, we were solid and hence we kept a clean sheet away from home.”

“If we look at Aizawl’s performance against most teams at home, they have scored plenty of goals, in a way the clean sheet is a positive result for us”, Costa added.

Meanwhile, Aizawl FC’s Head Coach Jahar Das rued the lack of clinical finishing in front of the goal that resulted in the Northeast Club failing to take advantage in the first leg.

“We failed to take advantage at home it is as simple as that. We played good Football in the second half and should have scored goals, but complacency cost us the match.”

“At Fatorda, Sporting Goa has a slight advantage because of the natural turf. Our boys usually practice on artificial turf which makes it difficult to read the ball at times”, Das informed.

Sporting Goa will lack the services of their box to box midfielder Rowlin Borges, which means in all probability Denson Devadas will partner Pratesh Shirodkar in the midfield. The Flaming Oranje will be hoping to sign off their season in Goa with a goal feast and give their fans one more match to look out for on May 21, 2016, in the Hero Fed Cup finals.

@Arunfoot
Previous AIFF Youth Cup tickets are available on BookMyShow & at the Tilak Maidan ground!
Next AIFF Youth Cup: ‘Motivated’ India U-16 ready to face Malaysia in their opener!