AIFF Youth Cup: ‘Motivated’ India U-16 ready to face Malaysia in their opener! 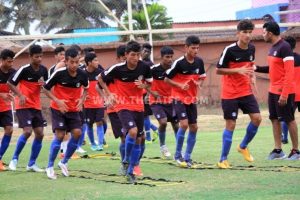 A day prior to India’s opening clash against Malaysia in the AIFF Youth Cup which kicks-off tomorrow, May 15, Head Coach of the Indian U-17 World Cup Squad, Nicolai Adam asserted the importance of, “competitive Tournament like the (AIFF) Youth Cup which act as a yardstick for the development of any particular Youth Team.”

Speaking at the Official Pre-Tournament Press Conference at the Bogmallo Beach Resort, the German Coach said: “Our main goal is to prepare for the FIFA U-17 World Cup and the AFC U-16 Championship which commences this year in September.”

“For us, the AIFF Youth Cup is a Tournament which gives us great exposure helping us to accumulate experience under our belts. The boys are looking forward to this Tournament and are very motivated to give it their all. Although the Tournament is a stepping stone of us we are very happy to have it,” he added.

But Nicolai’s Team has been dented by injuries to a few of its Players. “We are nursing a couple of injuries in our squad but that serves the other Players with an opportunity to prove themselves in the Team,” Nicolai opined when inquired about the Indian Team’s composition.

Explaining the preparation of the Indian U-17 World Cup Squad before the AIFF Youth Cup, Adam informed: “The squad assembled back in Goa on April 5 after the trip from South Africa, as the Players had to be released for schooling purposes.”

Though Nicolai has been in charge for over a Year, some of the boys have been practicing at the AIFF Academy since 2014.

“We have been together as a Team for 7-8 months now and it is not necessarily an advantage to have the National Team together for the whole time.”

Charting the roadmap ahead of the AIFF Youth Cup the German Coach mentioned about “going to Germany for a three month camp after this Tournament.”

“We are playing close to 20 games in Germany and that will boost us in the Player’s’ development.”

Adam reiterated that the door for the Indian U-17 World Cup Squad is open for every Player given that he possesses the necessary talent needed. “We are still on the hunt for Players and the door is open for any Player who has the talent that we need. We are still in a scouting phase.”