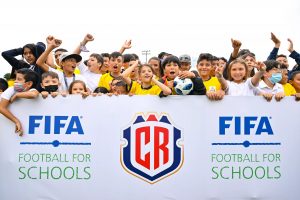 The host nation of the 2022 FIFA U-20 Women’s World Cup – Costa Rica has seized the moment to launch Football for Schools, the FIFA programme that uses football as a social development tool within the school curriculum of the countries that implement it.

“We started this programme three years ago, but due to the pandemic we were unable to launch it in additional countries,” said Samoura. “Now, with the help of Fatimata Sidibe, who has worked for the United Nations for over 25 years, we think the project can reach another level.”

A football festival, which brought together 100 local schoolchildren, brought the curtain down on a two-day workshop run by FIFA instructors, during which they provided training to the 29 educators who will be responsible for passing on the methodology to all of Costa Rica’s regions.

“I would like to thank you, not only on behalf of our football community, but also the country, for allowing us to be part of this project,” said Villalobos. “I’ve always said that football is about more than just results and what happens out on the pitch. Today everyone – the Ministry of Education, FIFA and the Federation – has joined forces to reflect on the fact that, while we need good footballers, we also need good and healthy citizens.”

According to Sidibe, it is significant that the launch coincided with the opening week of the FIFA U-20 Women’s World Cup. “The tournament slogan is ‘Vamos Juntas’ (Let’s Go Together), and it’s important that Football for Schools and the U-20 World Cup contribute to the promotion of women’s football together,” she said. “Women are the future of football.”