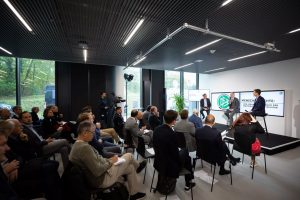 With 61 days to go until the 2022 FIFA World Cup kicks off, the German Football Association (DFB) has hosted a congress with representatives from the worlds of sport and civil society to discuss the situation of human rights in Qatar.

Andreas Graf, FIFA’s Head of Human Rights & Anti-Discrimination, presented the organisation’s due diligence process related to the protection of workers, fans and other individuals involved in the FIFA World Cup which is carried out in partnership with the SC and involves collaborations with trade unions and other independent organisations. In relation to labour rights, the programme focuses on companies building World Cup infrastructure, including stadiums and training sites, and service providers involved in the delivery of the competition, such as in the hotel, security and transportation sectors.

While acknowledging the key task ahead of promoting a long-term positive outcome beyond the competition’s final whistle, Graf highlighted the improvements made in Qatar since the country was awarded with the FIFA World Cup hosting rights in 2010. This includes landmark labour reforms such as the dismantling of the kafala system and the introduction of a non discriminatory minimum wage, which have already benefited hundreds of thousands of workers.

“Initiatives such as this congress organised by the DFB are key in terms of promoting an open and productive debate on the steps taken by FIFA and its Qatari counterparts to organise the World Cup in a way that safeguards people’s rights,” he said. “As highlighted by a number of international organisations and experts, the spotlight of the tournament has promoted positive change in Qatar and there is a widespread consensus in terms of the need to ensure that such progress remains an essential component of the World Cup beyond the event itself.”

In line with FIFA’s Human Rights Policy and the UN Guiding Principles on Business and Human Rights, world football’s governing body has regularly engaged with its member associations and civil society at large in recent years to encourage a debate on human rights in sport.