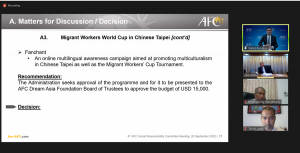 The ever-growing reach of Asian football in leaving a profound and meaningful impact across the Continent was further emphasised by the Asian Football Confederation (AFC) Social Responsibility Committee at its fourth meeting held virtually today.

The BFF is planning to empower an estimated 140 disadvantaged young people from five remote schools over five days during the summer and winter breaks.

Aimed at enriching the youth by strengthening their football and communications skills in a safe and fun environment tailormade for those with special needs, the BFF’s #bridgingthegap programme will be centred on the key areas of integration, education, development, creating meaningful experiences, enabling motivation and fun learning.

Members were also briefed on the CTFA’s collaboration with the Global Workers Organization (GWO), who are working in partnership to deliver a programme in Chinese Taipei aimed at demonstrating the value of football in promoting equality by integrating migrant workers with the local community.

The programme will consist of three main activities; the Migrant Workers’ World Cup Tournament which will involve 12 football clubs consisting of six migrant workers’ clubs and six multinational clubs with players from over 20 different nationalities within Chinese Taipei; the Summer Football Camp which will be organised for up to 20 school students ranging from the ages of 13 to 19.

In collaboration with the National Human Rights Museum, the camp aims to help participants understand human rights and the diversity and culture of migrant workers; and finally, Fanchant, an online multilingual awareness campaign aimed at promoting multiculturalism in Chinese Taipei during the Migrant Workers’ World Cup Tournament.

Additionally, members of the Committee also approved the KFU’s capacity-building programme for physical education teachers and orphanages, which is scheduled to take place from February to July 2023 and will target 60 educators from 30 schools and orphanages and focus on the AFC’s three social responsibility pillars – Child Safeguarding, Education and Social Inclusion.

A total of 600 boys and girls are expected to participate in the five-month programme through football tournaments and festival activities, with an estimated 30,000 children and youth expected to benefit from the initiative in the long-term.

Meanwhile, the LFA plans to implement a sport for development programme for adolescents and youth in Lebanon who have been impacted by the devastating effects of the pandemic.

Commencing in January 2023, the four-month programme will reach eight areas and 50 football clubs in Lebanon and aims to equip 1,000 Lebanese children with life skills and support through sports to enhance their adaptability to their ever-evolving circumstances.

The MFF in collaboration with the Mongolian Blind Football Federation have developed the MFF Blind Football Camp programme which will provide 3,000 to 4,000 visually impaired persons, particularly children, with the opportunity to develop a healthy body and mind while developing life skills through football.

Commencing in March 2023, the programme, which aims to promote inclusion and facilitate integration within a safe environment, will see the construction of a blind football camp consisting of three traditional Mongolian Ger.

Lastly, WAFF, in collaboration with Para Football, have developed the West Asia #FootballForAll Festival programme to provide inclusive football participation opportunities for children and youth with disabilities while supporting WAFF MAs to develop football for persons with disabilities in their respective countries.

Scheduled to be held on December 2 and 3, 2022, the programme, which coincides with the International Day of Persons with Disabilities, aims to target 98 players aged between 12-18 years and will follow a pan-disability format where players of different disabilities, from each WAFF MA, participate in an informal small-sided competition.

All six MA programmes will now be presented to the AFC Dream Asia Foundation Board of Trustees for further funding approvals.

The Committee also acknowledged the imminent impact of the newly launched AFC Social Responsibility Strategic Plan 2023-2027, which will serve as a key operational blueprint to enable the AFC in the effective and efficient management, administration and delivery of social responsibility initiatives, activities, and programmes over the next four years.

The Committee was also updated on the upcoming, ongoing, and completed projects since its last meeting, which include the United Nations’ Football for the Goals (FFTG) initiative, the upscaling of five Blind Football Centres in India, the Korea FA Football Love Project 2021, the AFC–All Nepal FA–Shelter Ashraya Nepal Prison Football Social Responsibility and the Indochina Starfish Foundation – Young Coaches Development programmes.