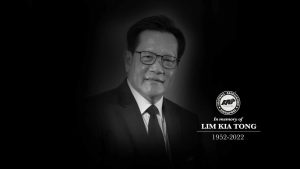 FIFA is deeply saddened following the passing of Lim Kia Tong, President of the Football Association of Singapore (FAS) and a dear friend of all involved in world football.

Mr Lim was a devoted servant to our sport in Singapore and across the wider south-east Asia region. He became the first elected President of the FAS in 2017 and was re-elected just last year.

FIFA President Gianni Infantino last visited Singapore and Mr Lim in late 2021 for the inauguration of the new FAS headquarters in Singapore, praising the member association for its visionary commitment to development.

“It is with great sadness and shock that we learned of the passing of Lim Kia Tong,” Mr Infantino said. “Mr. Lim was a great man and a huge supporter of football in south-east Asia. Both FIFA and the world of football have lost a great friend. Mr Lim was a trusted leader in the FIFA Disciplinary Committee and his devotion to developing football in his beloved Singapore was evident to me when I last visited him last year. Mr. Lim’s wisdom and support will be greatly missed by all in the football community.”

Mr Lim passed away at the age of 70. The flag of Singapore is being flown at half-mast throughout the day at the Home of FIFA as a mark of respect.