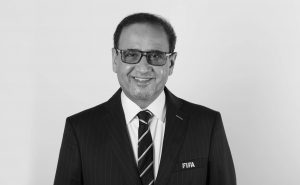 “Saoud Al Mohannadi truly loved football and dedicated a great deal of his life to the beautiful game that unites us all,” said the FIFA President, in a letter to the other FIFA Council members and the FIFA Vice-Presidents.

“We had the enormous privilege of being able to rely on his knowledge and skills at the service of football over the years, and we will forever fondly remember and cherish the many shared moments of work and friendship.”

“Saoud contributed significantly to the development and promotion of football and its values in his country, in the region and throughout the world. His legacy and work will be remembered, and he will be greatly missed.”

Mr Al Mohannadi was elected to the FIFA Council on 7 April 2019 following a vote at the AFC Congress in Kuala Lumpur, Malaysia, having been an AFC vice-president since 2015 and having held same role within the QFA since 2013.

He held the role of Chairman of the AFC Asian Cup United Arab Emirates 2019 Organising Committee, a tournament that delivered record-breaking TV viewership and digital engagement records. He was also part of the organising committees of the AFC Asian Cup in both Australia in 2015 and Qatar in 2011. He was CEO of the latter, having been General Secretary for the QFA between 2001 and 2012.