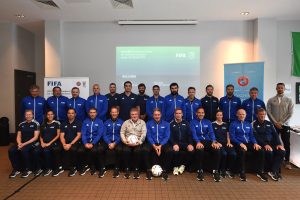 Some of the top Technical Directors from around Europe gathered in Leeds, in the heart of England, for a collaborative workshop hosted by FIFA and UEFA.

The three-day meet, which marked the first time the two governing bodies have held a technical workshop since 2009, was centred around increased partnership and the development of the technical director role across member associations.

“It’s great to align the two organisations and combine our support for the Technical Director workforce,” said Houchen.

“It’s the start of a long-term investment into the professional development of Technical Directors. Our aim is to make this support bespoke to the role and focus on the individual needs of technical leaders in Europe. We will do this through a new educational pathway and professional qualification.”

Ludolph, who has been at UEFA for over two decades, reiterated the importance of the role for the future development of the game in Europe.

“The role and the impact of the Technical Directors is crucial, both at their respective national environment but also for the future of European football. The Technical Directors are key, they are responsible for defining and leading the technical development programmes of the individual national associations.”

Former Latvia striker Marians Pahars – who was installed as Technical Director at the Latvian FA six months ago – was one of the newer Technical Directors in attendance in Leeds. The former Southampton forward was eager to develop his knowledge from his more experienced colleagues as he seeks to implement his own beliefs on Latvian football.

“I’m an open person, and I share my experience with pleasure. I share my knowledge, and if someone is interested in any kind of information, I’d love to give it,” said the 45-year-old.

Even for successful member associations such as Switzerland, whose men’s side have qualified for the past five FIFA World Cups™, there is always more to learn.

“I want to go further, I want to improve myself,” said Switzerland FA’s Patrick Bruggmann. “And this is the perfect occasion to see other colleagues and to talk about the problems they have and the solutions they have so that I can grow personally as a Technical Leader.”

With the UEFA Women’s EURO 2022 taking place in England this past month, the delegates had the chance to see the host’s 4-0 win over Sweden in the semi-final.

The display highlighted the development of women’s football and was particularly thrilling for England FA Technical Director John McDermott.

“The technical prowess of the players, the physical prowess – I thought it was fantastic,” he said.

“Obviously, England came out on top, but I thought the quality of the game was really good. And, I think for colleagues where the women’s game hasn’t yet reached similar popularity and levels, as it has here in England, we were all agreed about how inspirational the experience was.”

In conclusion Hans Rudi Hasler, the well-known former Technical Director of Switzerland, quoted “this position of technical director is the best job in the world” and encouraged all participants to step up to the challenge to make a long term impact for the benefit of football and their own member associations.