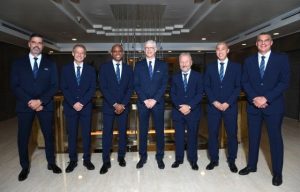 FIFA today unveiled the Technical Study Group (TSG), which will provide cutting-edge analysis of all 2022 FIFA World Cup – Qatar matches while increasing and developing understanding of the game across the world.

During the event, FIFA will share the most modern metrics and performance data in the tournament’s history with the worldwide TV and online audience, as well as with the participating teams and their players. Developed by the FIFA High Performance team and Arsène Wenger, the Enhanced Football Intelligence service will offer new and exciting insights to enrich the coverage and analysis of every game at the tournament through a unique set of in- and post-match visuals presented as augmented reality and traditional graphics.

Besides analysing the action on the pitch, the TSG will study trends and benchmarks for the future of the game and their impact on coach education and talent development. “We want to describe, analyse and interpret what is happening on the pitch to inspire technical experts and football fans in general,” said Wenger. “We will not only be collecting more data than before, but we will also be aiming to find the right balance between technical expertise and data. And we want to inform people about our technical observations directly and during the tournament itself, not months after the tournament.”