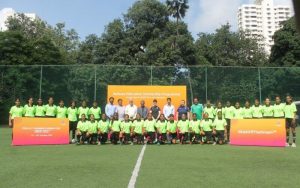 The Referee Education Scholarship Programme in Mumbai will have 32 female participants.

“It is imperative that the development of football be encompassing. The FIFA U-17 Women’s World Cup India 2022 is already encouraging female participation at the grassroots through its legacy initiative, the Coach Education Scholarship Programme, and the Referee Education Scholarship Programme is another key step towards equal representation,” Arijana said at the event.

“As women’s football is developing the world over in terms of viewership at the elite level and participation at the grassroots, it is only natural for the next step to be an increased number of female referees. We are, thus, very pleased with this initiative and believe it will leave a positive footprint in the ecosystem of Indian football,” said Arijana Demirovic.

Meanwhile, Dr. Prabhakaran believes that initiatives such as the Referee Education Scholarship Programme will inspire more women to choose football as a career.

“Development of women’s football and increased representation are key areas of focus for holistic growth of football in India. The Referee Education Scholarship Programme is a step in that direction. The 32 candidates of this programme are representative of the huge pool of women within the current ecosystem who are up and willing to pursue a career in football,” said Dr. Prabhakaran.

“We believe that such initiatives will inspire more women to be actively involved in football. With an increase in female referees – and coaches – female participation at the grassroots is bound to increase,” concluded Dr. Prabhakaran.

The Referee development programme are designed to produce qualified Indian referees at all levels for domestic and international competitions and promote refereeing as a career.

The programme’s main goal entails building a key strong support structure for refereeing, with a special focus on human capital through conducting development activities in grassroots, youth development, and professional matches to share the updated Laws of the Game (LOTG) knowledge and implementation of the same across all levels.