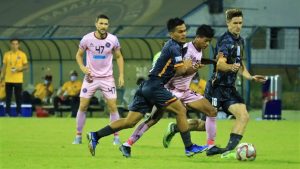 A dull start to the first half did not showcase a lot of effective attacks on goal. The game picked up pace after the midway point of the opening forty-five. Pedro Manzi sent Pritam Singh on a run down the right. Pritam crossed it across the face of the goal and, surprisingly, Anil Chawan came charging in but could not get a touch on it to tap-in the opener.

Rajasthan United did get their opener at the half-hour mark when Omar Ramos’ inch-perfect free-kick landed at the feet of Pritam, who just tapped it in from close range to give his side a crucial lead. Seven minutes later, it was one-a-piece as Travis Major crossed the ball in towards Ashish Jha, who headed the equaliser in from an acute angle.

The tempo of the game rose and players of both sides moved forward with new found desire. Mauro Dos Santos came flying in with a reckless two-footed challenge on Beitia but escaped as the Argentinian was only shown a yellow. From the resulting freekick, Kurtis Guthrie curled his low shot around the Rajasthan United wall and into the net to bag his 12th goal of the season in the most amazing fashion.

Minutes later, Rajasthan United could have pulled level when Flan Gomes played a good cross into the box for Pedro Manzi. The Spaniard reached the ball first but his strike was aimed straight down the keeper’s neck, making it an easy save to make for Jaspreet Singh. At the other end, RoundGlass Punjab could have established a two-goal cushion but brave blocks from Gurmukh Singh kept Rajasthan in the game.

In the second half, substitute Maheson Singh’s decent run was halted by the Rajasthan United defence. Guthrie tried to pick up the pieces but his effort was too high. Guthrie was in-front of goal with the ball coming towards him again, just moments later when Aakash Sangwan played the ball in from a freekick but this time Gurmukh was able to deny the Englishman.

Five minutes away from the hour mark, Guthrie was brought down near the edge of the box by Dos Santos. The tall striker stood over this freekick, looking to add another goal to his tally of twelve. This time, however, the wall stood tall and the ball deflected off of it and went behind for a corner.

Guthrie did not take his foot off the pedal in the second half. He was on the attack again a couple of minutes later and was denied his second of the night by brave goalkeeping from Bhaskar Roy.

The arrival of Alocious on the pitch was a tad uplifting for Rajasthan United. The forward was involved in numerous attacks on the Punjab goal but the combination of good defending and poor finishing kept him at bay.

Eighteen minutes from time, Anil Chawan played a good ball to Alocious in the box. It was on a plate but the shot was scuffed and skied.

Ultimately, after warding off the Rajasthan United attackers, RoundGlass Punjab were able to defend their lead in the second half and waltzed away with all three points. Rajasthan United were left to rue the night on which they had glorious chances to score but luck was just not in their favour.

The win takes Punjab within one point of Mohammedan Sporting having played a game more. They are four points clear of Sreenidi Deccan, who have a game in hand. On the other hand, Rajasthan United are still level on points with NEROCA FC. However, Neroca also have a game in hand.