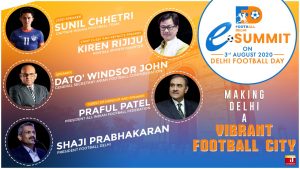 The Executive Committee of Football Delhi had recently decided to organize a Digital Football Summit on August 3, which happens to be the birthday of India captain Sunil Chhetri. The theme of the eSummit is “Making Delhi a Vibrant Football City”.

Football Delhi further plans to invite influential speakers to be part of the eSummit and engage all local football stakeholders to play an important role in developing football in Delhi.

Can’t get better than this. We present to you the Opening Panel of the #FootballDelhi E-Summit!
We’ve got lots more coming your way, stay tuned!#DelhiFootballDay pic.twitter.com/pvlYTqZyrX