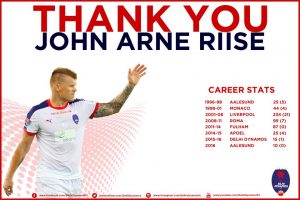 One of Norway’s all-time best footballers in John Arne Riise earlier today announced his retirement from professional football at the age of 35.

The Molde-born Riise made 110 appearances and scored 16 goals for Norway in the international arena.

Riise started his career with local side Aalesund FK before going on to play for AS Monaco, Liverpool FC, AS Roma, Fulham FC, APOEL FC (Cyprus) and Delhi Dynamos FC before returning to Aalesund FK earlier this year.

On his personal blog John Arne Riise wrote, “My inner goal was to play football at the Norwegian top level until I was 40. But that is not to be. It stops here.”

“Lately there has emerged a completely new feeling in me that I am no longer strong enough to perform at my best.”

“I like to play football but the motivation is still not strong enough to run the race at the highest level. This body – and this head – has been through so much over the last 20 years.”

“It is heavy and painful admission and very full of emotion but it is most of all honest.”

An honest assessment by the man, who was loved by fans wherever he played for his never give up attitude and 100% commitment to his team.

In India, Riise was loved by the Liverpool fans but in his stint with the Delhi Dynamos in the Indian Super League last year, Riise should that attitude and commitment for his team and club, which made him a fan favourite elsewhere.

Delhi Dynamos president Prashant Agarwal expressed his sadness at learning about the development and said, “He’s still in such fine form! What a fabulous player! Everyone at Delhi Dynamos FC is going to miss him. He’ll always be special. He was one of the pillars of our successful ISL 2015 campaign, and his towering presence made a huge difference to the dressing room. We’ll surely miss him!”

Riise sounded extremely upbeat when he informed DDFC about his decision and chirped, “I’m very excited about starting a new chapter in my career. Of course, I’ll miss playing actively, but I still have a lot to look forward to.” Riise has, on previous occasions, expressed interest in coaching. On being asked, he said, “I can’t reveal much about my future plans right now. It’s still too early. I want to spend time with my family, most importantly. And, hopefully, continue to stay involved with football.”

John Arne Riise, you will be missed…

@Arunfoot
Previous Why Schweinsteiger is so important to Germany & coach Löw at Euro 2016!
Next VIDEO – CNN: Sweden’s Zlatan Ibrahimovic: As a person I’m 20 out of 10!