Francis Dadzie stars on his GPL debut for Sporting Goa against Cavelossim!

Arunava Chaudhuri 2016-10-06 I-League Comments Off on Francis Dadzie stars on his GPL debut for Sporting Goa against Cavelossim! 1,369 Views 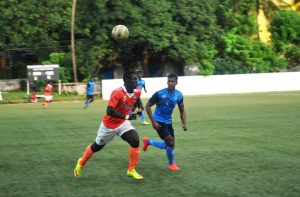 Finally the missing piece from Gaffer Mateus Costa’s armour seemed to have fallen in place as a fine first half brace from the Sporting Goa’s latest acquisition Francis Dadzie saw the Flaming Oranje beat Santa Cruz Club of Cavelossim in the Goa Pro League encounter at Duler Stadium on Thursday. The Ghanaian forward Francis Dadzie (19’ & 41’) scored twice on his debut to seal a comfortable victory for the Panaji based side.

First quarter of the match saw both teams play some impressive end to end football. Both sides were determined to not concede early and maintained a solid defensive formation. In the 18th minute Sporting won a free kick about 25 yards away from the nets when Quan Gomes was brought down with a wrong footed challenge by Cavelossim defender, Francis Dadzie stood up to the occasion and slotted home a fantastic curling left footer to put Sporting ahead in the 19th minute. After getting the much needed lead Sporting’s Quan Gomes & Glan Martins created some fantastic movements from deep. Dadzie using height to his advantage exploited the Cavelossim defenders making them more cautious at the back, this created large gaps in the midfield which allowed Sporting to launch their attacks with yards of space at their disposal. In the 36th minute Glan got hold of a ball deep in the mid and charged forward launching a bullet shot from 20 yards off, the Cavelossim keeper barely managed to get a touch keeping them alive in the match. In the 41st minute Glan saw a picture perfect run from Dadzie to set him up with a good ball the latter found it right in the slot to put it past the keeper making it 2 – 0 for Sporting. The score stayed 2 – 0 at the halftime.

Crossing over Sporting continued to dominate the match. In the 54th minute Sporting launched a fantastic counter attack with Quan finding the second half substitute Mauvin Borges on the run covering half the field only to missing out on the final touch. The Ghanaian almost registered his debut hat trick in the 51st minute when he latched on to a Quan Gomes cross from the right but the shot deflected off a clueless defender for a corner. Mauvin once again came close to scoring when he made a dazzling run on the right beating two Cavelossim defenders to take a perfect shot towards corner of the nets; a full stretched dive from the keeper assured Cavelossim no further damage in the score line. With this victory Sporting have collected 11 points from 5 matches same the league leaders Salgaocar FC and will sit second only to be separated by a marginal goal difference.

@Arunfoot
Previous India U16 coach Nicolai Adam: Have the calibre to give top European teams a hard fight!
Next Mohammedan Sporting coach Mridul Banerjee named as best coach of CFL’s Premier Division – A!